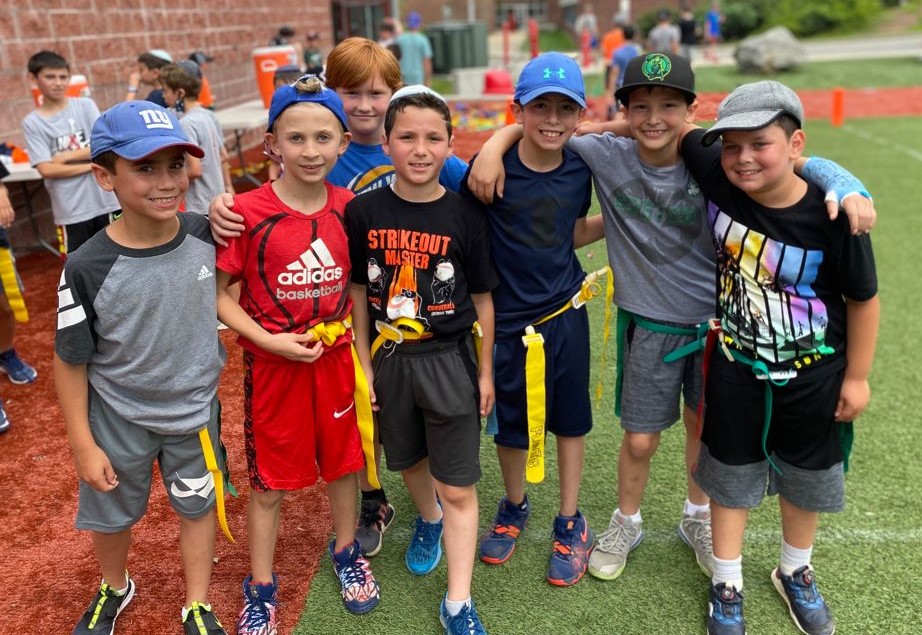 Camp Slapshots, entering its 21st year of excellence, is the premier sports day camp in New Jersey. Camp Slapshots has provided hundreds of campers with the opportunity to improve their hockey and basketball skills, learn proper sportsmanship and play competitive games, all while having a blast!

Started in 2003 with twelve campers from Teaneck playing hockey, Camp Slapshots has grown each year to a record 250+ campers per week in 2022. Our campers come from Hillside, Livingston, New Rochelle, NYC, Riverdale, Scarsdale, Springfield, and West Orange. Camp Slapshots consists of hockey, basketball, flag football, soccer and baseball. With innovative skill workshops for our youngest campers, exciting clinics, competitive games, and amazing contests and tournaments, Camp Slapshots is the ideal place for anyone who enjoys sports. Our sports themed trips for older campers has taken the camp to the next level!

With an amazing staff to camper ratio, each camper will receive the individual attention that he so deserves.

Rabbi Sariel Malitzky has been passionately involved in both formal and informal Jewish Education, summer camps, and youth sports for over a decade. After serving as the head of hockey, followed by head of sports in Camp Lavi, he founded Camp Slapshots in 2003, and has been directing and guiding its continuous growth ever since. From its inception, Rabbi Malitzky has guided and directed every aspect of the camp. With a commitment to skill building, an emphasis on playing sports “the right way”, and a dedication to ensuring that the campers have a blast, it is no surprise that the camp has been a tremendous success. The camp, which began in 2003 with 12 campers, was full last summer with over 250 campers!

Rabbi Malitzky has held numerous coaching jobs in the Yeshiva High School Hockey League. During his coaching tenure, he developed a reputation for teaching proper sportsmanship, in addition to teaching the requisite skills to compete at the highest level. In 2003, he co-founded the ever popular TABC JR Hockey League, a floor hockey league for elementary school boys in Teaneck, NJ.

After 10 amazing years of teaching at TABC, Rabbi Malitzky is currently in his 3rd year at JEC High School where he serves as a Rebbe for multiple grades and levels, and is a key member of the administrative team. He also serves as the Director of Recruitment, which is a natural position for his warmth and energy to exude. In addition, Rabbi Malitzky is the Assistant Rabbi at Ohr Torah in Highland Park.

Jordan Ginsberg is excited to be joining Camp Slapshots for a 5th Summer. Jordan attended DRS Yeshiva High School for Boys where he spent 3 seasons on the basketball team. After that he learned in Yeshivas Kerem B’Yavneh for 2 years. He graduated from Y.U. with bachelors in psychology and he is a Musmach of RIETS. Jordan is currently a Rebbe in DRS Yeshiva High School for Boys in Woodmere.

Jordan was a madrich on NCSY Kollel for 3 summers and spent 1 summer as a Chinuch Rebbe in Kaylie before joining Camp Slapshots last summer. He and his wife, Shoshana, were the previous teen directors at the Young Israel of West Hempstead, where they are both originally from, which entailed running the teen minyan and organizing various types of programming. Jordan also ran a learning and basketball night program towards the end of the summer for the teens of West Hempstead.

Jordan, Shoshana and their daughters, Tehilla and Bailey are currently living in Queens, NY.

Ezra Stone grew up in Teaneck playing sports. Ezra was a star defenseman for the TABC Jr. Varsity and Sr. Varsity teams. He was an instrumental player on TABC’s JV’s undefeated championship team. Ezra served as assistant captain on both JV and Varsity TABC Storm teams.

Upon returning from studying for two years at Yeshivat Sha’alvim, he served as sports commissioner for the Morasha Kollel’s sports league, where he organized leagues and tournaments. Since then, Ezra has been working at Camp Slapshots in different capacitates. Ezra also served as the Youth Director at Congregation Arzei Darom for 2 years. In addition to being a Youth Director, Ezra has coached hockey for the last 4 seasons. He coached Moriah for 3 seasons, Frisch Varsity for one season and is now currently the head coach for the RYNJ Hockey team. For the past 2 years Ezra has led the Junior Congregation at Congregation Bnai Yeshurun. During the school year, Ezra is a a Rebbi in TABC and an assistant to student activities. He received his Semicha from RIETS in 2020.

Ezra recognizes his role as a model for athletic aptitude, as well as sportsmanship and proper middos. Ezra is dynamic and caring. He stresses playing sports “the right way”, which is so important for our campers to learn.

Ezra has been involved in Camp Slapshots for many years and is looking forward to another amazing summer.

Ezra lives in Cherry Hill with his wife, Talia, and their sons, Shai and Ami.

Matthew Wexler is looking forward to returning to Camp Slapshots as Head of Chinuch. After attending Torah Academy of Bergen County for high school, Matthew learned for two years in Yeshivat Sha’alvim, graduated from YU with a B.A. in accounting and is currently in Semicha in RIETS.

Matthew spent four summers as a Madrich on NCSY Kollel, where he enjoyed teaching and running programming (and whose campers are now counselors in Slapshots!). Last year, he joined Camp Slapshots for his first summer as Chinuch staff.

Matthew is excited for a productive, inspiring and enjoyable Talmud Torah experience at Camp Slapshots. He hopes for everyone in Camp to growth in their Avodas Hashem, learning, and Middos, all while having a great time!